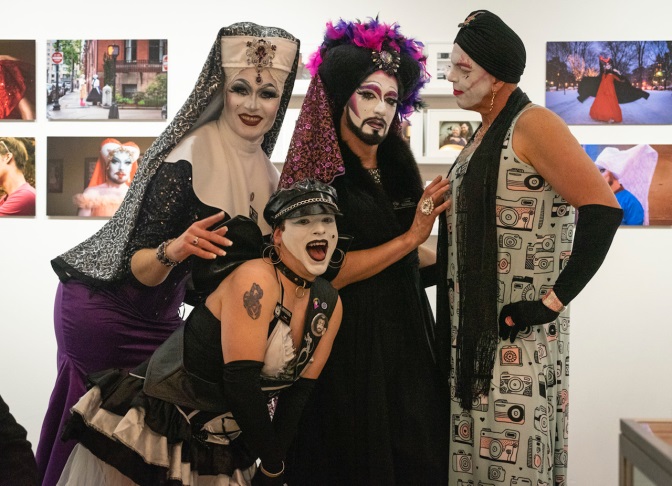 On Friday Evening, January 25 th , 2019, a few of the Boston Sisters met up with members of the Fort
Lauderdale Sisters to support our very own Saint Meg-a-Pixel’s Art Exhibit, titled: “Sisters of the
Commonwealth”, at the Stonewall Museum and Gallery in Wilton Manors, Florida.

The Boston Sisters, Srs. Angie O’Plasty, Heidi Sins, Hellen Damnation, Lida Christ and Teresa Glass, met
Srs. Emma Em, Luna GlitterTitz, Pinky FlaminGo and Guard Taylor Maid at the venue and quick
introductions were made. The VIP Reception started at 5PM, and we had the opportunity to go through
the featured exhibit and the Permanent Collection that were on display. We shared our stories as the
Boston Sisters (featured in Meg’s exhibit) and also told attendees more about the Sisters as an
organization and what we stand for. At 6 PM, Chris (the Director of the Gallery) introduced Meg, and she
welcomed all and explained more about the exhibit, and how it came to fruition. Lida and Hellen then
took a turn and shared (on a bigger scale) what we do, what we stand for, and why we look the way we
look.

The Fort Lauderdale Sisters graciously provided a few items for exhibit too, and Sister Pinky FlaminGo
explained the Initiate Process (see picture of their habits) in their House, and also some of the “Archive”
items that were present. I particularly loved the “Veil of Remembrance” that was on display – very
similar to the “Veil of Shame” that we have used in our House in the past, but with a very positive and
uplifting (yet sad and moving) spin to it – a white veil that is used as a canvas to note
names/quotes/anecdotes of whatever event/person/entity is being honored, and then it is presented to
the person/organization involved to display as a mural in future.

At 7 PM, upon conclusion of the VIP event, the doors opened to the Public, and there were a good few
people that came in to view the exhibit. We shared stories, facts and laughs with the new-comers and
then Meg did her speech again. At this stage Sister Lida really blew the crowd (and some loyal
supporters) away with her very poignant and memorable speech on what we stand for – I, personally,
have never heard a “what we do and why we do it elevator speech” being delivered so eloquently, and
many attendees commented after on how amazing the organization is and thanked us for our service.
Sister Pinky then gave a quick run-down of the Archive items for the newcomers. We also had the
opportunity to stand outside the gallery and were able to entice a few more pedestrians to come into
the venue, and experience the offerings. Closer to the end of the event, we were able to recite our
credo to the attendees, joined vials of Boston and Fort Lauderdale Blessing Glitter, and Sister Hellen
graciously made a $250 donation to the Stonewall Museum and Gallery on behalf of the Boston Sisters
of Perpetual Indulgence. As guests started to depart, we bid them a fond farewell and thanked them for
supporting the event.

We then headed, en masse, to “The Pub” – a local hangout where the Imperial Court of South Florida
were having their “Out of Town” Drag Show prior to the Coronation of the Emperor and Empress for
2019, scheduled for the following evening – both who are also Sisters when not donning their Imperial
Jewels. We had the opportunity to engage with revelers in the Bar, met many people and spread joy
and happiness – the things we do best.
There were much joy, love and warm fuzzy feelings!