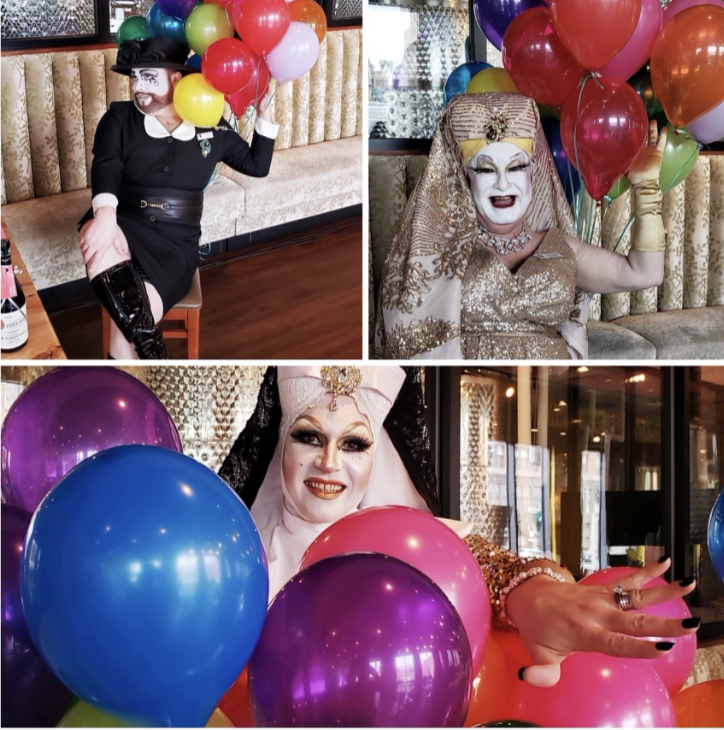 At 11 AM on Sunday morning, Sisters Heidi Sins and Angie O’Plasty were joined by Sister Gloria Leluia for
manifestation in Dorchester. We departed at 1 AM, for an extremely timely arrival of 1:15 PM. After a
few last minute adjustments (read: attach nails – thank you Glo for your help), we were invited to attend
the briefing with Marc and the rest of the Victory Programs Volunteers. We were soon joined by Sister
Teresa Glass. Roles were assigned, and the Sisters helped in the following areas:
 Balloon Pop for bottles of Wine – Sister Gloria Leluia
 Mystery Prize Draw – Sister Angie O’Plasty
 Raffle Ticket Sales – Sister Teresa Glass
 Golden Raffle Ticket Sales – Sister Heidi Sins
At 2 PM the doors opened, and the guests started arriving. Seeing that America’s Test Kitchen (one of
Heidi’s secular person’s favorite cooking shows) she may have gone a little fan girl when she met Chef
Elle from the show (and was asked to zip her into her stunning blue pant ensemble). Later on during the
event Governor Charlie Baker and his wife joined the festivities – Glo sold the Governor a Balloon, and
Sr. Angie had a very memorable interaction with the First Lady of Massachusetts (as previously shared
via House email by Angie). There were also tables and tables laden with Silent Auction items throughout
the venue – it was very impressive to see how many items were for sale!
The live Auction started around 4-ish, and the Auctioneer, Erin Ward, and her colleague were masters at
their craft! They are also genuinely nice people too, which was an added bonus! Victory Programs were
able to raise about $125’000 on this Sunday afternoon!
At about 5 PM Sister Glo was asked to do a quick speech to introduce us and explain who we are and
what we do, and she handled it masterfully. After this, event thank you’s were done by longtime friend
and supporter of the Sisters, Marc Davino from Victory Programs, and the event officially came to a
close.
We mingled, took pictures, chatted to long-time friends, hung out with more celebrities, met new
friends and just had a great time, before saying our goodbyes and departing the venue.
There was much love, joy and happiness!
Many thanks,
Heidi