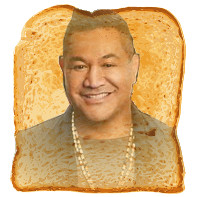 After retiring as an NFL player, Esera Tualo came out in 2002 and began a career of advocating for the LGBT community. To combat homophobia, he has worked with different sports organizations, including the NFL and the Gay and Lesbian Athletics Foundation; has made and continues to make appearances on television programs such as The Oprah Winfrey Show and Good Morning America; testified before the legislature; and continues to speak at colleges and corporations around the country about explicit and implicit homophobia. He also runs an anti-bullying program called Hate in Any Form is Wrong.