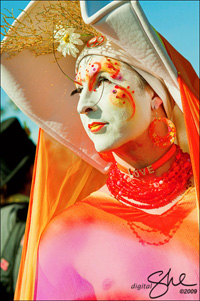 On Easter Sunday in the year of 1979, three friends came together and, donning
traditional nun’s habits and a phenomenal sense of irony, marched through the city of San Francisco to the shock and amazement of all they encountered. With firm roots street theater, the Sisters of Perpetual Indulgence™ begin with the ministry of Entertainment. Appearing as cheerleaders at gay sports matches and other events, they soon recognize within themselves a profound ability to raise funds for people in need and to draw attention to important social and political causes. Their ministry expanded to include Service and Activism.

These first Sisters of Perpetual Indulgence™, and those who soon joined them, might have chosen any form of manifestation in protest to the “normal”. Even though the decision to both honor and challenge the traditional image of the nun was almost arbitrary, it became clear that some members of the community they served were feeling a great hunger for spiritual figures who would respect their individuality and inherent right to live freely in pursuit of happiness. These would-be ministrants projected upon the early Sisters the responsibility of Care-Takers for the Community and the Sisters evolved and responded to meet these needs to the best of their abilities. When the AIDS crisis exploded in full force in San Francisco, Sisters continued their ministry of Service by providing a personalized form of hospice care. In addition, with the publication of Play Fair!, the first safer-sex pamphlet to employ “sex-positive language, practical advice, and humor,” the ministry was once again expanded to include a tradition of Education.

Over 35 years, the practice of the Ministry of Perpetual Indulgence has spread across the globe, with Houses and Missions in the Americas, Europe, Africa, and Australia.

In the spring of 2009, Sisters Eunice X and KrisTall Mighty moved from San Francisco to Boston. They were quickly joined by a host of new, would-be Nuns to form the Boston Sisters Convent of the Commonwealth. Today they are a fully recognized House within the greater Sisters of Perpetual Indulgence™.