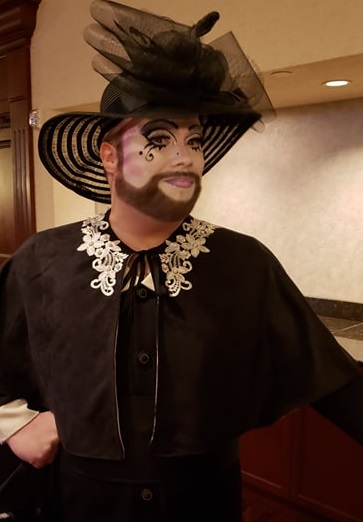 In the month of Cancer. In the year of the Dog. Some say I’m a crabby bitch.

June 29, 2013 when I attended North Shore Pride in Salem, MA with the Boston Sisters. It was my first official outing and the Sisters treated me like I was already part of the family.

Your Family Tree [click on name to visit profile]:

My Daughters are Grace A’Gawd and Inda Beginning.
My Mother is Sandra Music.
My Big Sisters are Frieda B Fabulous and Ima Miracle.

Describe your path leading to your calling to the order

The Sisters held mainly a peripheral position in my life the past few years; I saw them online long before Boston ever had a House. Then in 2011, I met Sister Eunice X at the Boston Pride parade. I had been going through a rough patch in my life and wanted someone “anonymous” to talk to. She listened to me and was the first person to make me feel like I was normal and didn’t talk down to me or condescend. She changed my entire view of the situation.

A year or so later, I began attending drag bingo at Club Cafe and once a month The Sisters would host, raising money for some charity or foundation. I began learning all their names and personalities and finally befriended them. I knew that the work they did was something I could do and was something I’d wanted to do. I spoke with Sister Sandra Music, and a month later I was an Aspirant.

I was lucky enough to grow up in an accepting and tolerant household surrounded by people who loved me no matter what I did or who I was. I know that not everyone has this. I feel it is my responsibility to share my experiences and to give back to the community; to help them come out of their shells and allow them to truly be themselves, free of guilt, shame, and judgment.

Explain your interpretation of the Ministry of Perpetual Indulgence

Always be yourself. Always be true. Treat others as your brothers and sisters, because in the long run, they are.

Five ideals by which you hope to serve your community