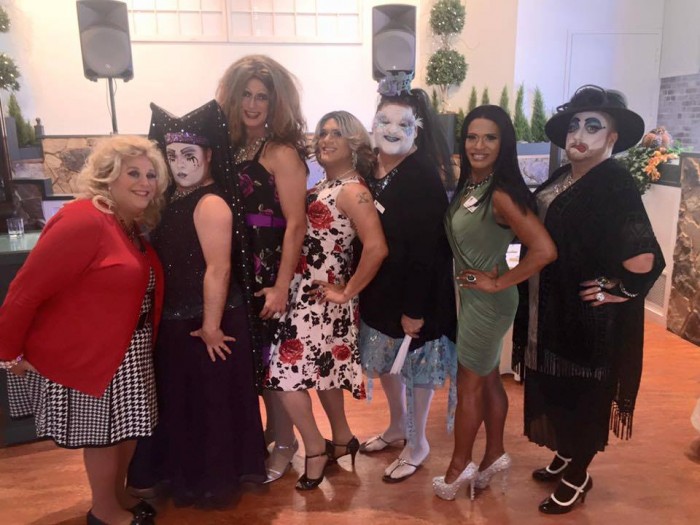 On the morning of Sunday, 9/27, Sister Rosetta Stone met up with Sisters Gloria LeLuia and Sandra Musique and hit the road to West Hartford, CT for the 9th annual “Life’s a Drag, Let’s Do Brunch.” We arrived in the area a bit early and had time to show Gloria the beautiful Colt Firearms factory before crossing town to the upscale environs of West Hartford, arriving at the Pond House in Elizabeth Park.

The Sisters were shown into the dressing room behind the stage of  the Pond House where we manifested. We were soon joined by the event’s hosts, Morgana DeLuxe and Mini DeLuxe.

The event sold all of its tables and had a generous and enthusiastic crowd. Beneficiary of the event was St. Phillips House.

Sandra, Gloria, and Rosetta acted as the emcees during the event, moving through the fashion walk, followed by the entertainers, including snappy numbers by Sandra and Rosetta.

We crowned Summer Orlando as “Miss Drag Brunch,” and ended the event with the traditional “drag tag” number, which raised funds via “nominating” members at their table to be in drag tag.

After the event, we demanifested, and retired to Rhein’s Deli for a dinner. The drive home was spent singing (and by that, it’s meant “operatic volume”) showtunes on the ENTIRE drive home.