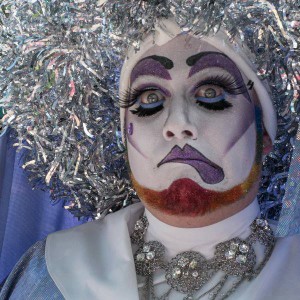 My Big Sisters are Ana DeCros and Imogen Demira. My Mothers are Sr. Eunice X and Sr. KrisTall Mighty.

Explain your interpretation of The Ministry of Perpetual Indulgence

Our Ministry is no different than any of the other love-based religious teaching, we are called to reach out to the disenfranchised of society. We don’t judge, we don’t condemn, we only offer unconditional love to those who need it. If we can walk down the street fully manifested you should feel comfortable looking however you want.

Initially I was drawn to the Sisters because of the sense of fun that is expressed in the aspect of Entertainment. As I have spent time with the Sisters I have come to feel my Calling in a real way. I have made a conscious effort to make Sandra a positive influence on others and as a result have influenced myself.

I chose my name mainly because when you introduce yourself as Sandra Music, the first thing people think of is one of the most iconic nun movies ever filmed. It’s one of those names that everyone can figure out and have a good chuckle over. If people feel like they’re in on the joke, they warm up to you quickly. I want to bring a smile to the faces of the people we help.

Music has also always been a special force in my life and it’s something that bridges all cultures, groups and boundaries. It’s a powerful force and will likely be an integral part of my ministry.

Three Tenants and Five Ideals by which I pledge to live and practice: