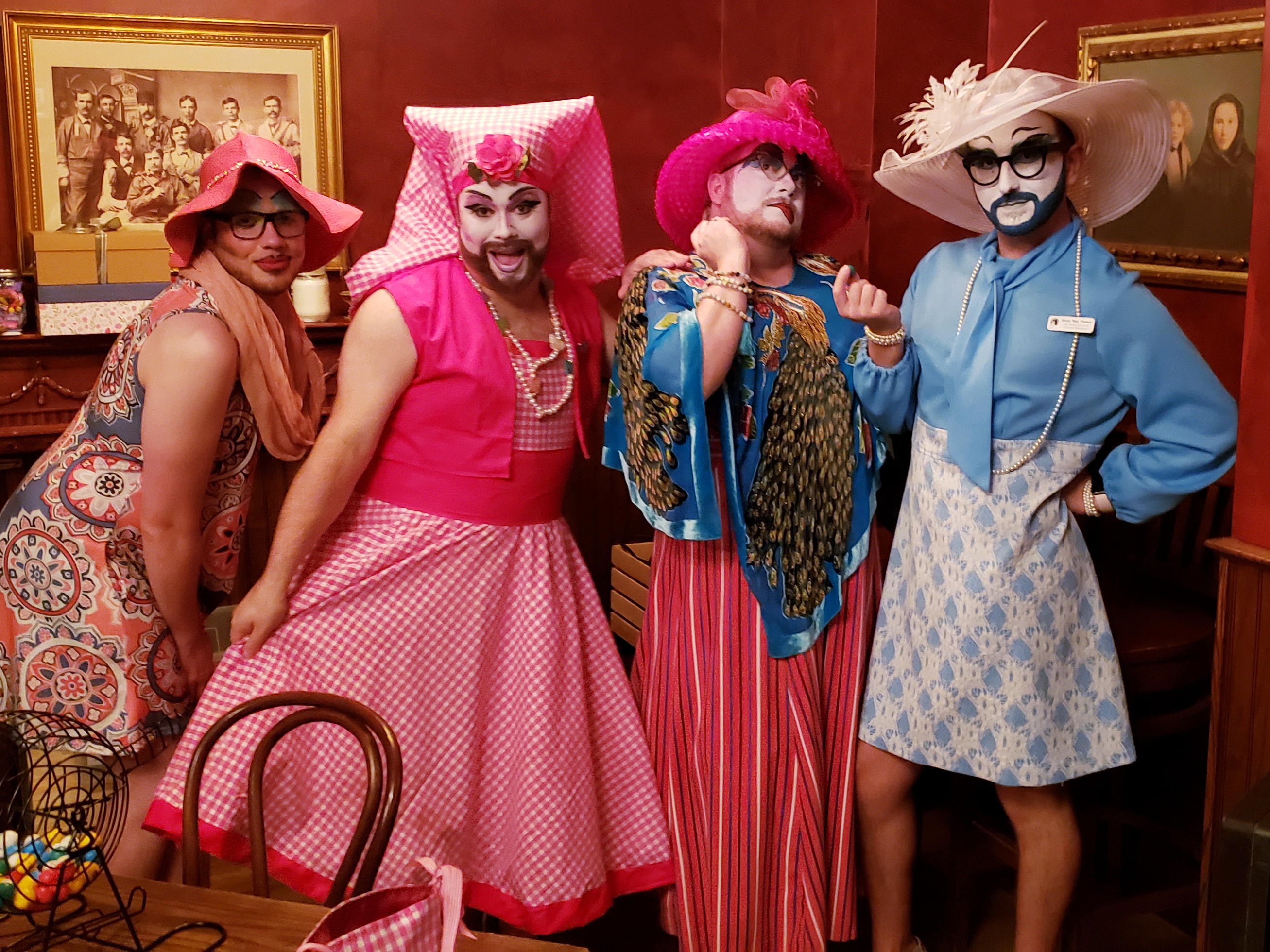 On August 27 th , Sisters Gloria LeLuia, Sandra Music, and May Flower along with Aspirant Len met up at
Gloria’s house, known as The Pumpkin Priory. Once the faces were put on and the dresses were zipped,
Aspirant Len joined Sister Gloria in her office to record a short little video to share on social media inviting
folks to attend their event – another Sister Bingo at Democracy Brewing!! Once that propaganda was created
and spread, the four of them piled into the Sandra-mobile with all of their wimples and bingo supplies and
headed out!
Once there, The Sisters met up with events manager Karsen who was – as always – super excited to
see them. She welcomed The Sisters, got them set up in the private room out back, and gave The Sisters three
awesome prizes to give away – including a twenty-five dollar gift card to the brewery! While The Sisters were
setting up, Grace, the representative from the American Cancer Society, snuck in the door to introduce
herself. She was an absolute delight and gave The Sisters some pamphlets to spread around detailing some of
the amazing works that the organization does.
This month, the room filled quickly and early. Partly because some of The Sisters’ most loyal friends
and fans showed up to bring their support (and their friends!) and partly because the beneficiary brought
about a dozen people! The Sisters were also, joyfully, joined by some newcomers who had never attended a
Sister Bingo! Just for the newbies, The Sisters were extra goofy and zany and at one point Sister Sandra even
rode Sister May like a horse – and they weren’t even drunk!
After a couple rounds of Bingo, The Sisters pulled out an old favorite … The Apple of Temptation! The
rules are simple. You can either win the prize The Sisters offer you (in this case, it was a free beer at
Democracy Brewing) or whatever is in the large plastic apple which The Sisters brought. No one – not even
The Sisters – knew what was inside (wink wink). That’s the fun of it!! The round continued and eventually
New-Friend-of-The-Sisters Alberto yelled “BINGO!” He approached the table and was offered the free drink or
what was inside the Apple. The crowd cheered him on – “GET THE APPLE!” “TAKE THE APPLE!” “THE
APPPPLLLLEEEE!!!!!!!!!” So, of course, as they always do, Alberto took what was inside The Apple. And what,
you might ask, was in there this month? A delightful plush toy in the shape of a stomach ache microbe –
Shigella Dysenteriae. Yes. Alberto took a risk and ended up with dysentery – he shouldn’t have eaten that
apple. The crowd hooted and hollered, Alberto dropped his head and laughed, his friends cheered and
chortled. It was a good time for all. On the plus side, later in the evening, Alberto also won a gift certificate to
Inman Oasis, a delightful spa – so he was happy.

It was, yet again, a night full of laughter, jokes, crude humor, and fundraising. Near the end, Sister
Gloria counted the money and landed at $440. “I’m sorry, everyone,” she exclaimed, “but I have a bad case of
OCD and I need our earnings to be a nice round number. So, can we please raise another sixty bucks and hit a
cool five hundred?” Sister May ran around the room snatching bills from people’s hands and bringing them
back to Gloria. After this, The Sisters had reached $496. “PLEASE,” Gloria pleaded, ”just four more dollars!”
Just then, Friend-of-The-Sisters Kevin jumped up and threw twenty bucks at Gloria. “HOORAY! WE DID IT! But
… you know what this means. Now we are at $516 and that is going to drive my OCD crazy. I guess we need to
hit six-hundred now!” The crowd laughed and a few more people threw some cash their way. All in all, The
Sisters managed to raise $531 for the American Cancer Society. A great amount for this event! This brought
our average Democracy Brewing total to $498.20 a month! Movin’ on up!
The Sisters are so delighted to have built this new partnership with Democracy Brewing and can’t wait
until next month when their beneficiary will be the Massachusetts Trans Political Coalition!! See you there!