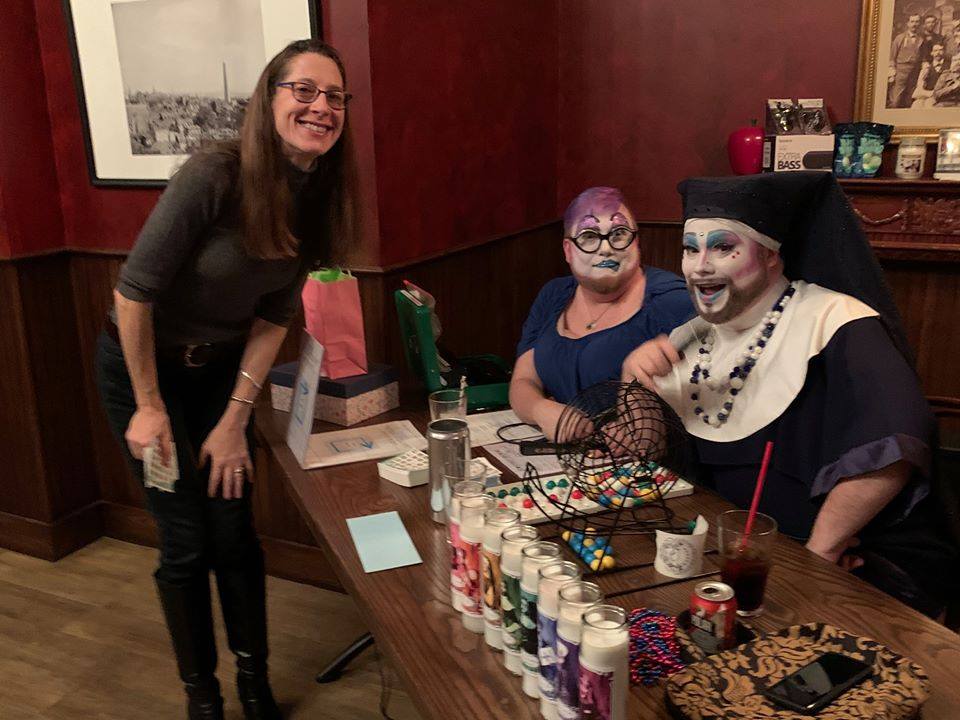 Finally, after two months of cold, rainy weather on Bingo nights, The Sisters were blessed with a relatively warm and sunny night! So, Sisters Sandra Music and Gloria LeLuia packed their car and headed over to Democracy Brewing for another fantabulous Bingo event!!

After carrying what seemed like 500 pounds of prizes from the parking garage to the venue, The Sisters were met by Wax, one of the managers of the brewery, who quickly got them settled into the private backroom. This month, an event had taken place just before The Sisters arrived and when they heard that a drag bingo event was going on, some of them decided to stick around! Doors opened at 7:45 and an uncommon influx of early birds poured in. Sisters Sandra and Gloria made sure to get everyone seated with their free Bingo card and then proceeded to squeeze as much cash out of them as possible – for charity. This month’s beneficiary was the Friday Night Supper Program, an organization which, for the past thirty-five years, has been providing free meals for homeless and low-income persons! It is an amazing organization and a very worthy cause.

Sisters Sandra and Gloria were on their own this month, so once they ran out of their typical microphone patter, they started to veer off in all sort of directions. Stories ranged from conversations about Mary Martin’s family tree to a debate on the pros and cons of dating The Crypt Keeper – “I mean, sure, he’s dead, but he has a fabulous mansion.”

After a couple rounds of Bingo, The Sisters pulled out an old favorite … The Apple of Temptation! The rules are simple. You can either win the prize The Sisters offer you (in this case, it was a free beer at Democracy Brewing) or whatever is in the large plastic apple which The Sisters brought. No one – not even The Sisters – knew what was inside (wink wink). That’s the fun of it!! The round continued and eventually New-Friend-of-The-Sisters John yelled “BINGO!” He approached the table and was offered the free drink or what was inside the Apple. Not a second passed before he shouted, “I want the Apple!” Just in time for Thanksgiving, Sister Sandra opened the apple to reveal – a $1.00 mini pie purchased from Stop and Shop earlier that day. John laughed, said “I LOVE PIE!” and sat down to enjoy his dessert. He was a real sport about it. Later that evening, he won a gift bag full of candy! He was really over the moon with all of the sugar he won.

Another newbie, Emily, was there celebrating her birthday with friends. Emily might not have won, but she did get to take home a custom Sister Prayer Candle, a plastic tiara, and a photo of her with The Sisters. She was an absolute joy and was especially tickled by Sister Sandra’s many – MANY – inappropriate sexual innuendos. Emily is a big fan of The Sisters now.

As the evening wore on, The Sisters did a count of their cash. “Okay folks,” Sister Gloria announced, “we are currently at an even $400. If we can reach, let’s say, $500, we will give everyone here a raffle ticket and raffle off an amazing gift certificate valued at $130!!” Sure enough, the offer of raffle tickets sent cash flying around the room. Within a few minutes, Sister Sandra had re-counted the cash and we landed at $485. “We only need fifteen more dollars to hit $500!” Just then, a patron stood up, walked to the table, and threw a ten and a five dollar bill our way. We did it!! Everyone got a raffle ticket and once the round was over, the raffle was pulled! What a great show of comradery.

The Sisters called the last couple of rounds and by 10:10, had given away most of their prizes. In the end, The Sisters managed to raise $520 for the Friday Night Supper Program. It was a truly spectacular night and everyone had a blast!! They told us so! We will see you next month at Democracy Brewing for our last Bingo night of the year!