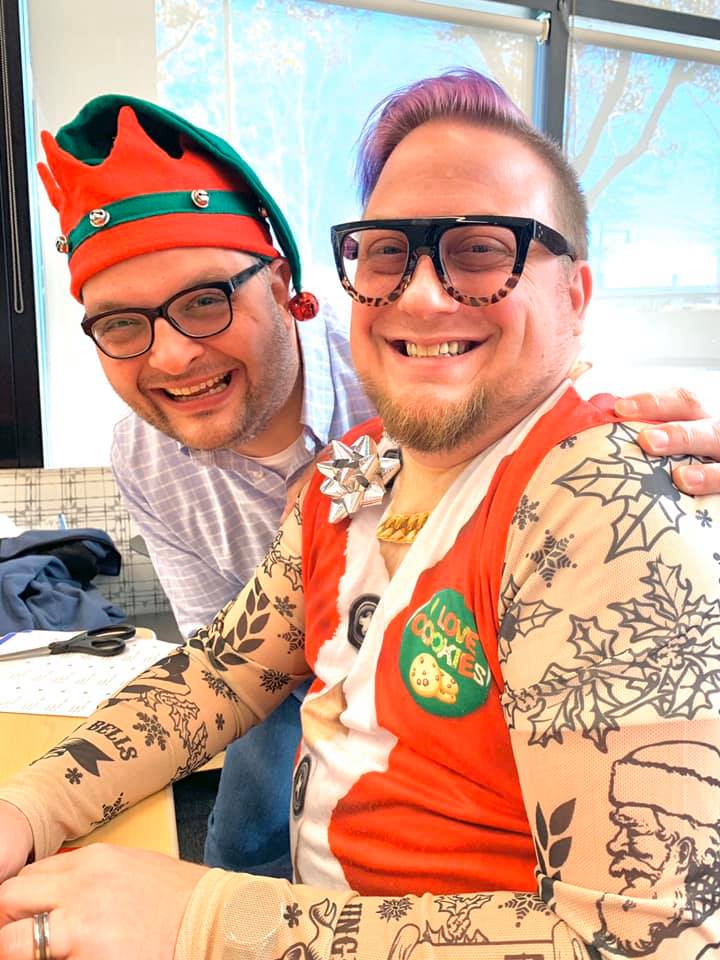 On Saturday, 11/23/2019, Sister Heidi Sins was met by Sisters Sandra Music, Angie O’Plasty, Harrie Magdalene, Guard Isaiah Prayer and Postulant David at the Pumpkin Priory to collect the gift and transport them to the wrapping location at Ipsen Pharmaceuticals.  Sister Rosetta Stone collected the wrapping supplies and stocking paraphernalia the night prior.

At about 8:40 AM the motorcade arrived at Ipsen, and after some negotiation with the Transit Police Officer, we were granted access to the site to unload.  We were met by Marjorie and Kevin, and after everything was set-up in the wrapping venue, we distributed the last gifts to the recipient bags and audited that all the gifts were indeed onsite and ready to be wrapped for the 50 recipients we committed to.

By 10 AM, we had 34 volunteers show up – these include members of the Boston University Queer Alliance, the Boston Brits and the Manchester United Boston Supporters, Meg, Cory and his partner Alex and friend of the Sisters, Lauren who all assisted with the wrapping of the gifts.  Sister Grace A’Gawd and Liz joined us shortly thereafter – they, with the aid of a couple more volunteers, prepared and stuffed the stockings and added a personalized card for each recipient.  During this time, we were also joined by Postulant Len, who brought his muscles with him and assisted with all the manual labor tasks assigned to him.

Lauren brought some additional gifts, and these were handed to the Social Workers for the 2 sites (DCF Springfield and DCF Robert van Wart) to distribute to children who may not be covered by donations from the Sisters or other organizations.

Once the wrapping party kicked off,  after some welcome speeches and how to’s were explained, the gifts were wrapped in record time – the last gifts were audited at 11:40 AM!  In anticipation of the 12:30 PM Pizza Party, Sisters Rosie and Heidi lead a Q&A session for the volunteers – most of them were not aware of the Sisters or what the organization does, so this was a great opportunity to educate a new group of Sister Supporters!

After the Pizza Party, we returned the room to a clean and organized state and awaited the arrival of the DCF delegates from each center to collect the gifts and take them to their respective sites.  Soon after 2 PM Kate from Springfield and Maritza from Robert Van Wart arrived, and their respective vehicles were promptly loaded up with the gifts.  They were both EXTREMELY grateful and complimentary of the Sisters and Volunteers efforts for Sister Santa 2019.

Once Robert Van Wart’s pick-up was completed, Sisters Sandra and Heidi, accompanied by Postulant Len dropped the remaining wrapping supplied off to the Storage Unit in Somerville.  Sister Angie’s vehicle was loaded up with Wrapping Supplies fro USS Marlborough, which will be delivered to them on 12/15/2019.

It was a wonderfully satisfying and feel good day, and we are very happy to be able to provide some children with DCF with thoughtful gifts for the 2019 Holiday Season!

1)      Sister Gloria LeLuia for assistance with Shopping, Receiving, Storing and Sorting of all the gifts

2)      Sister Angie for making multiple trips to Boston to deliver candy, and assist with the sorting of gifts

4)      All the BSPI members who helped drive the gifts and supplies to Ipsen, and who helped with various aspects during the day.

5)      Marjorie and Kevin for assisting with shopping, providing food for the Volunteers – coffee, donuts and pizza, and of course the wrapping location!  You guys are the bomb.com

6)      Cory for his generous donation of toiletry supplies from Target – we had so much stocking stuffers, that a decision was taken (and approved by Cory) to re-purpose the toiletries for our Homeless Handouts handled by Guard Isaiah Prayer

7)      Lauren for the additional gifts and candy that was sent out to the 2 sites to be distributed to children not originally assigned to Sister Santa 2019.

8)      All the Volunteers who took time out of their weekend to assist with executing Sister Santa 2019 – Thank you!!

9)      If I did not mention anyone personally – please forgive me – I am so thankful for all the help provided by ALL in making Sister Santa 2019 such a resounding successful!

Wishing you all a very Happy Holiday Season!

Much love and appreciation,