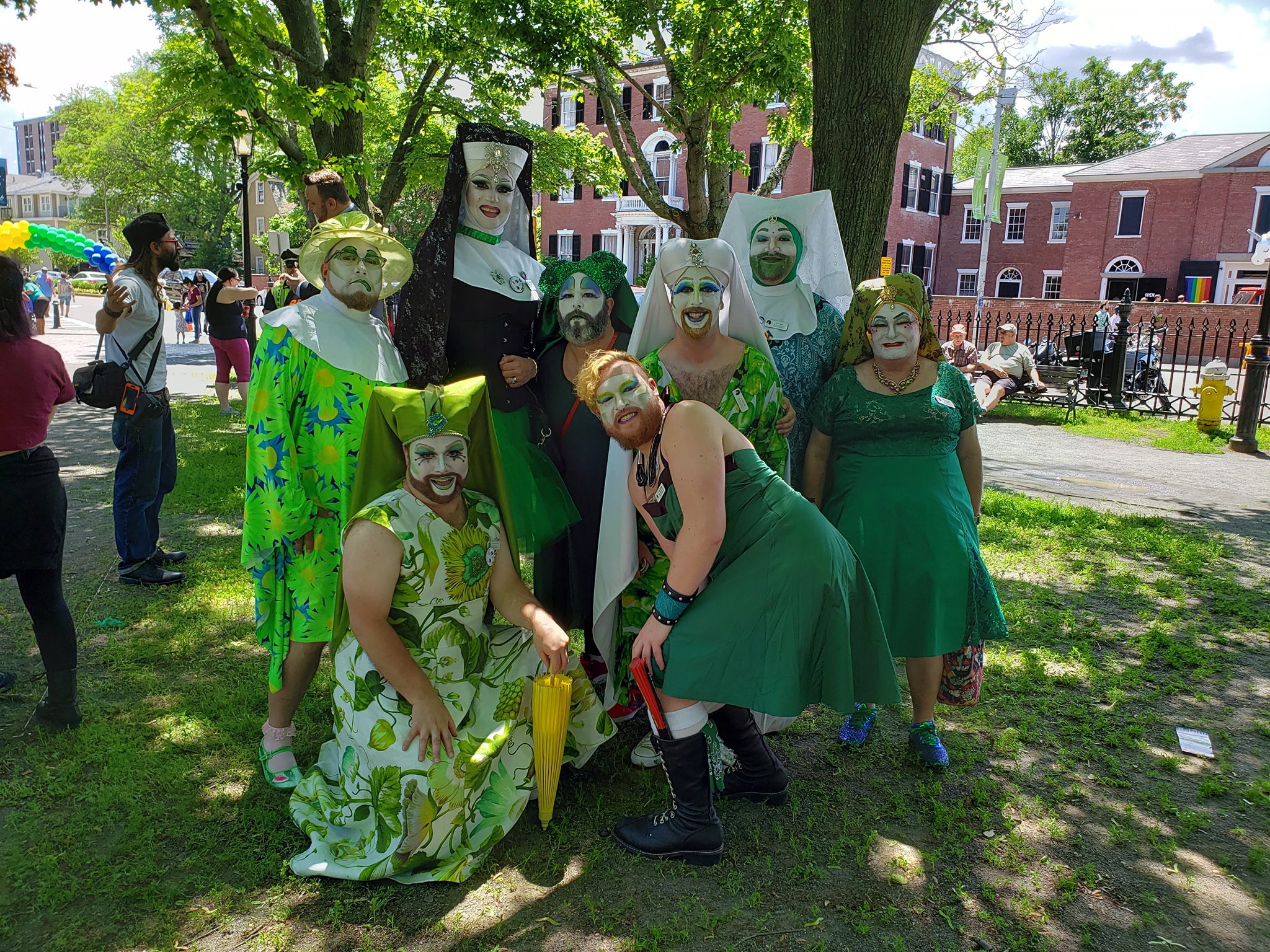 Shortly after 10 am, Novice Sister Pax was joined by Sister Shiny Brite and Guard Ian Knight in the Shetland Park Properties parking lot. In the midst of last-minute preparations for the parade, they checked in, mingled, and began taking the first of many pictures of the day. They were soon joined by Sister Heidi Sins, Novice Sister Edith Moreass (AKA Novice Guard Isaiah Prayer), followed by Sisters Gloria LaLuia (and boyfriend Liam) and Sandra Music, and finally Sister Teresa Glass and a secular Sister Tori D’Affair. Around this time, Pax began lovingly shoving swag to give away at their fellow Sisters and Guard as the banner was assembled and began to line up for the parade (and battled some ferocious winds).

En route during the parade, the group handed out beads, bubbles, and pins, and joyfully wished the community of Salem a “Happy Pride!” Many hugs and high fives were given in addition to all the swag.
Upon entering the festival grounds (Salem Common) the Sisters and Guard, at this point joined by the lovely Sister Angie O’Plasty, immediately rushed over to the preachers already mid-speech and shielded attendees from their hatred and bigotry. At this time, countless words of thanks and appreciation for what we were doing started flooding in, which was truly overwhelming and humbling. We were also joined by Novice Sister Pax’s mother (Mama Pax), sister Danielle, and family friend Louise. Pictures continued to be taken and hugs continued to be given freely.
Once the crowd began to die down, the group dispersed and spent some time wandering throughout the festival and posing for even more pictures. After a sufficient amount of wandering, our preacher friends started up again and Sister Heidi and Novice Sisters Edith and Pax decided to shield once more before heading to the Hawthorne Hotel to grab a bite to eat and enjoy cocktails and plenty of water. Once all were sufficiently stuffed, the group parted ways.

A truly inspiring and joyful day was had by all!