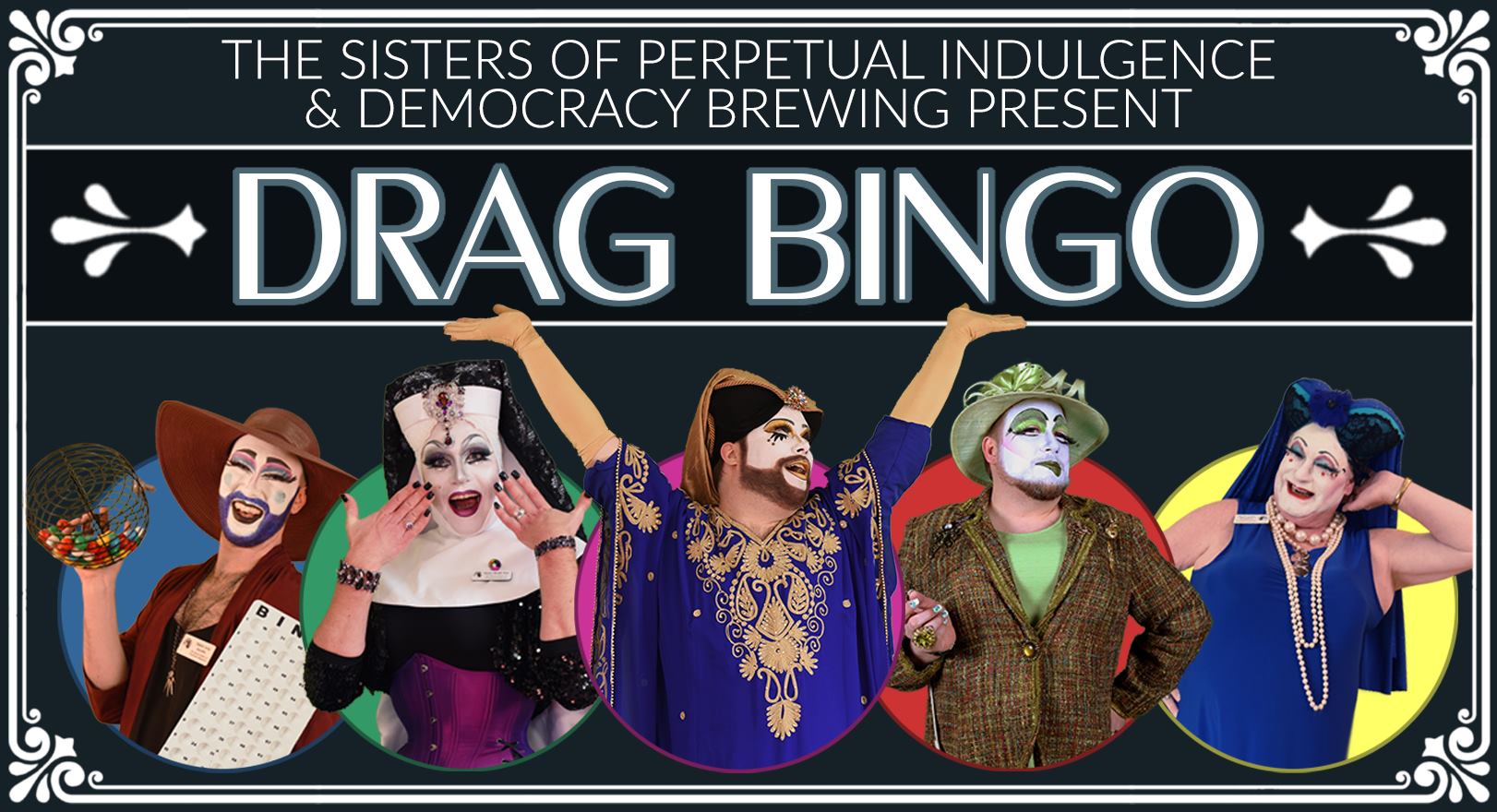 On a hot and humid Thursday afternoon, Sisters Gloria LeLuia, Sandra Music, and Angie O’Plasty –
along with Aspirant Len – piled into the Sandra-mobile with all of our wimples and bingo supplies – ready for
another fantastic event at Democracy Brewing. Once there, The Sisters met up with server Stef and manager
Tom to get things set up, get Bingo cards, get a couple of delicious in-house brewed beers, and organize
ourselves.
The evening started off a bit slowly with a few people trickling in, but knowing how our crowds love to
be fashionably late, we were not surprised when – by 8:25 – the room was packed and every seat was taken. A
group of clergy from an Episcopal conference even showed up to show their support and they were an
absolute delight to work with! A short while later, The Sisters were also joined by Sister Teresa Glass and
secularly-dressed Sister Tori D’Affair.
As Democracy Brewing is a newer venue for The Sisters, we were eager to try out some new things for
this Bingo event. We printed up small Bingo card mock-ups which explained the rules of each different round.
We renamed many of the rounds with special religiously-themed names (like “The Virgin Mary,” “Halo,” and
“Heaven and Hell”). We even altered the price of the cards to ensure that our guests could still spend the
same amount of money and have as even a chance of winning as possible without being overwhelmed by
having six cards in front of them. We also, of course, reinstated some old classics like our fan-favorite “Apple
of Temptation,” a round where the winner can chose the prize we present them, or whatever mystery prize is
inside the Apple [people always go for the Apple]. Overall, a lot of these small changes seemed to improve the
flow of the evening immensely – the guests all seemed to enjoy them as well.
About a half hour into the game, The Sisters were approached by a patron alerting us to the fact that it
was their friend Kevin’s birthday! So of course, after the round was over, The Sisters took to the microphone
to call Kevin to the front, place a unicorn tiara on his head, hand him a “Work That Crown” plaque, and to get
the entire bar to sing Happy Birthday to him. He was a good sport.
Later, during another round, Sister Gloria was calling numbers and a patron at a nearby table kept
making frustrated noises. Gloria said, “With those noises, you either have absolutely nothing on your card, or
you are one ball away.” “I am one away five different ways!” The crowd chuckled as Gloria made lude jokes
about the patron’s “five ways.” After a few more balls were called, and the patron still had not won, Gloria
turned to her and joked, “Okay, let’s call some more balls so little ‘Five-Way Sally’ over here can finally win.”
The patron quickly snapped her head toward Gloria, eyes wide, and shouted, “WHAT?! My name IS Sally!!”

The crowd laughed as Gloria started praising Jesus and speaking in tongues over her ability to read people’s
minds. Then she ordered Sally to show her her ID to make sure she wasn’t lying – she wasn’t.
The Sisters were raising money this evening for Waltham House, an organization which provides
housing and services to homeless queer youth, many of whom were forced out of their family’s home. Hearing
the mission of this organization, many people started reaching into their pockets and throwing additional
money at The Sisters. Shortly after the elevator pitch, four large anonymous donations made their way into
The Sisters’ hands and after each one, The Sisters stopped the Bingo round to acknowledge the receipt over
the microphone and encourage a round of applause. People were so generous and giving.
As the evening wound down, The Sisters counted the funds they had raised and came to a total of
$580!! All of which will be donated to Waltham House. The Sisters also took time to chat and takes pictures
with the Episcopal group about ministry, activism, volunteerism, etc. It was a truly blessed evening.
Following this, Sisters Teresa and Tori and Aspirant Len headed out to the Alley Bar to spread some
more joy while the old cranky nuns, Gloria, Sandra, and Angie piled back into the car to head home! Thank you
to all who made it out this evening. This is a truly magical event and we are so excited to be continuing it every
month now!!