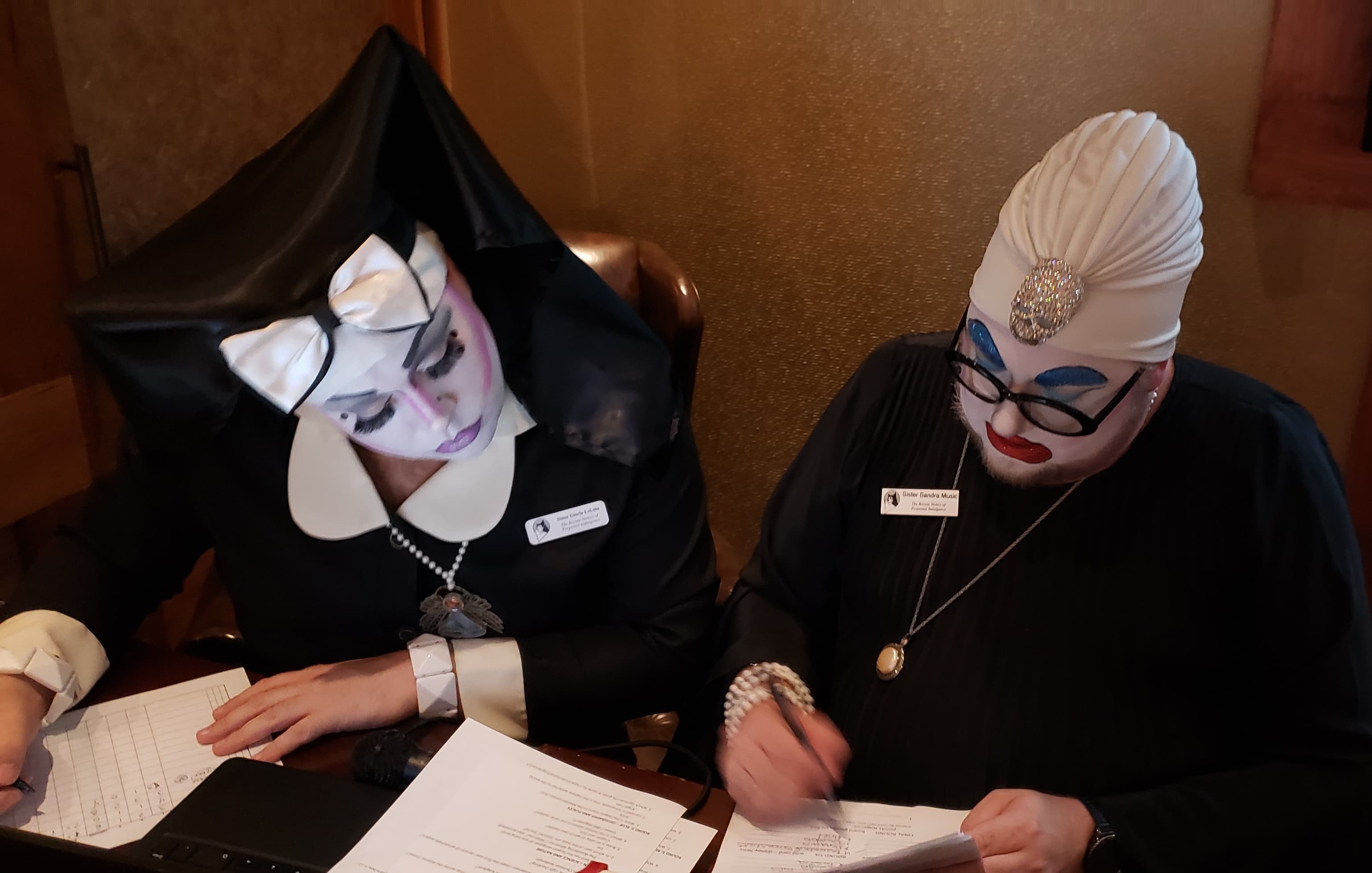 Holy smokes, Batman! Another round of Trivial Pursuit: Live! has come and gone. And this time around it was a real family affair as Sister Sandra Music was joined by her Daughter, Sister Gloria LeLuia the Holy Cow, and then by Glo’s Daughter, Sister Grace A’Gawd! The MuLuGawds were back in full force.

Sister Gloria spent a couple of hours getting ready at her home while Sisters Sandra and Grace hopped into their cars and drove over. Both arriving late (due to work and traffic), they put on their fast faces and still managed to look amazing! Then, The Sisters piled into Grace’s car as they headed to Adventure Pub in Arlington for another pub trivia night.

The crowd this month was – as most of our crowds are – a laugh riot. Always willing to call back at The Sisters and interact with each other. Such a fun and lively group. We even had two groups return from last month — including the family of Novice Pax! We also, of course, had some new friends arrive and join the fun.

One team had a Jason Momoa look-alike, so they, after some ribbing from The Sisters, named their team “Momoa and More.” Sister Grace, ever the competitor, also decided to play along, so she grabbed an answer sheet and lounged on her chaise. We assured the patrons that she was not given the answers beforehand – and her score certainly proved that.

As with all Trivial Pursuit nights, The Sisters had six categories – Arts and Entertainment, Science and Nature, History, Geography, Sports and Games, and Wild Card. The Sisters got to choose the Wild Card category and this month, they picked DISNEY! Most of the teams got most of those questions right, while other categories were far more hit-or-miss. During the last round, the Sisters’ faces would have been red if they weren’t wearing so much makeup – they learned that the answer to one of their questions was wrong!!
“Who is the only Disney Princess to be shown getting married at the end of her film?”
While Sisters Gloria and Sandra thought the answer was Ariel, some teams alerted them to the fact that Tiana was also shown at her wedding!! I guess the trivia question was written before The Princess and the Frog came out.

Once points were tallied from the first six rounds, each team was allowed to wager any amount of their points on the final question – category: Board Games on Film. The question was asked and the teams scurried to answer, most finishing within the first minute. Once all of the answer sheets were collected, the points were tallied one last time and the scores were announced. Sister Grace’s “team” (it was just her), known as “Graciiiieeeee!!” came in last with 16 points (we told you, she was not given the answers ahead of time). She claims that she purposely lost so that none of the patrons would have to be in last place. “Momoa and More” were only three points away from first and one of the returning teams (with a new name) “So Much Gazpacho” came in second – one point away from first. But, the winning team this month was the other returning group (with the same name) “Nunya Business”!! Every team did great this month and they were all within mere points of each other.

Everyone should feel very proud of themselves (or else Sisters Gloria and Sandra need to come up with harder questions next time). This time around, The Sisters brought some delightful gift boxes filled with tissue paper for the winners – reusable and everything! Four boxes were given to the four team members and included custom swag from Adventure Pub, swag from The Boston Sisters, and a bunch of other assorted goodies – including a ticket for two free Bingo cards at The Sisters’ next Bingo at
Democracy Brewing (CROSS-PROMOTION!).

As The Sisters cleaned up, the crowd began to mingle more with each other. The Sisters went into the crowd to chat and to provide the ever-popular ‘blessings’ (lip prints) on the patrons’ foreheads and cheeks! Everyone seemed to have an amazing time – even the teams that didn’t win. As this was not a fundraising event, The Sisters were able to focus on joy and laughter and community. In that regard, the event was a HUGE success!! The teams, as previously mentioned, spent the night yelling back to The Sisters, chatting with each other, cracking jokes … it was a riot, in the best possible way. We can’t wait to do this event again – it is such a joy. Thank you to all who attended and to those who helped behind the scenes!!